After building a few Gatsby sites for other projects I finally decided to move my old wordpress site on over. And not only that, but totally redesign it to be more of a landing page for myself with the ability to write some simple blog posts. Historically this has always been a portfolio site with really complex pages for previous client work I've done, but it didn't feel relevant or useful anymore. My plan is to create some dribbble shots of a few projects and link to them from here.

I had planned to use the new gatsby theming option for this since there are a number of awesome looking blog themes available. I experimented with a few to see what the setup and utilization process is like, but in true Katie fashion I just didn't love the override aspect of it. This exploration gave me a lot of ideas for how to structure the existing site so definitely worth the time and effort. But after all that I realized I just wanted a totally clean slate to start, and all I would need to do is add mdx and gatsby-source-filesystem.

After setting up the basics with the default starter (like adding eslint rules and some basic styling), I followed the guide for implementing gatsby-source-filesystem and programmatically creating pages, which I ended up needing for more than just blog posts. 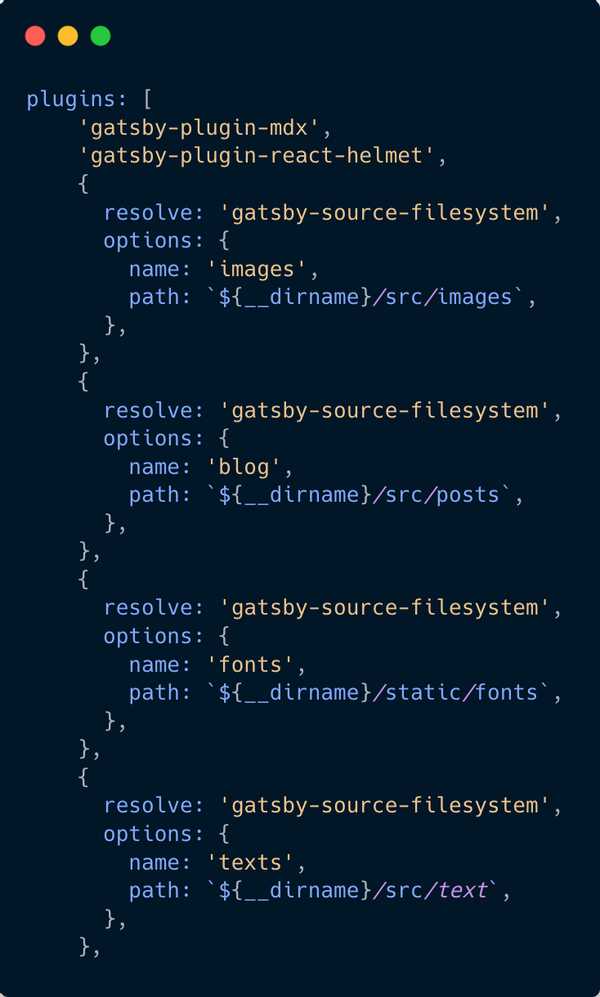 I also created a posts page template using MDXRenderer to grab the contents of each mdx post. I went with mdx instead of just markdown because I use mdx for internal style guide documentation at work, so I'm already comfortable with it. I like having the ability to bring in React components if I need to and the setup is very similar to markdown. 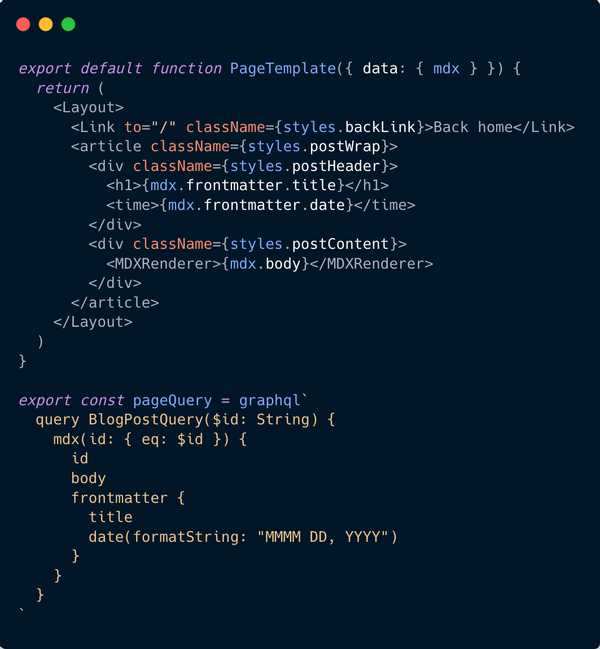 The only issue I ran into with this system is rendering a list of posts on the homepage. As you can see in my gatsby-config I also have a folder called text which are markdown files containing large chunks of text that I render as a component <Text/>. Since I set up a query on the homepage to grab the mdx files and map to a list, those non-blogpost markdown files were also being listed. I think I could have solved this issue in a more robust way, but my solution was to filter the allMdx query to only the /posts/ directory. 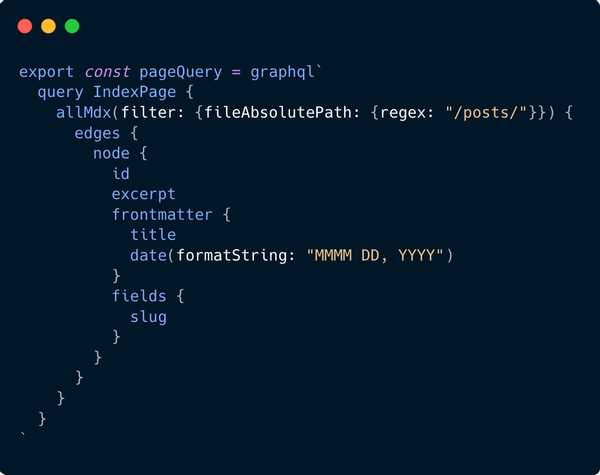 In true hybrid fashion I mostly designed this site in the browser as I developed it. In this case I approached the design slightly backwards- I built the thing, basically creating a skeleton of content and typography, and then I imported it into Figma with html-figma to have the ability to drag items around my canvas. 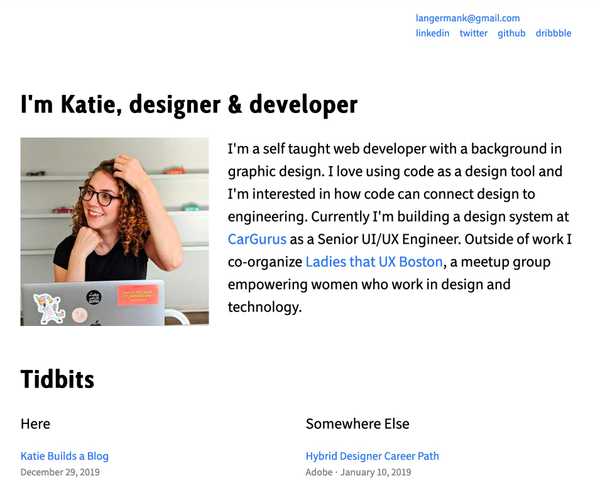 This approach worked really well for me. At first I felt overwhelmed that I didn't have THE idea for the design. Nothing was really hitting me while I was in the code. But the moment I brought it into Figma I felt like I had more room to explore and iterate. I started by moving things around and playing with details like borders, inverse text/background, and shapes. I generated a palette using palx with my go-to shade of red and landed on the lightest hint of pink with dark navy. It felt like me. I explored different treatments of the Tidbits section. All of these things are easier for me to accomplish on an artboard, and once something sticks I'll take it into the code to refine and systemize.

a note on typography

I think this probably deserves its own post. But long story short, I heard Jason Pamental talk about variable fonts on the new Smashing Magazine podcast and knew it was time to investigate. This would be my opportunity to go down that rabbit hole. And oh, what a joy! My background is in graphic design. So much of my education was around typography, and I hadn't really thought about it in this way for a LONG time. But reading about variable fonts and deeply looking into what's currently available to buy or download was a nice reminder of my design background. And why I love it. Even 5 years after college I still love the same typefaces as I did in school. All this to say, Gill Sans was my first love and I found a variable font called Cabin that is similar. So I started playing with that, and also introduced Adobe's Source Sans Variable for body copy. Cause' why not? I'm not 100% happy with how it all looks but I'm excited to keep messing with it.

So far I'm enjoying my new gatsby blog. Deploying with netlify is super easy and fast, and I love that I don't need to deal with a host anymore. Next I'll be adding some links to dribbble shots showcasing some previous design work, and potentially linking to some codepens. I'd like to use this site as a playground for some creative ideas I have. Like a nice little escape from normal work stuff, potentially more along the lines of graphic design.